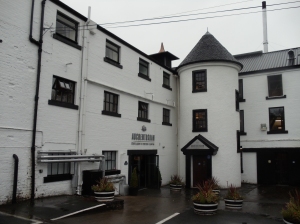 The Auchentoshan Distillery is located just outside the centre of Glasgow, and is one of very few lowland distilleries still in production. Situated on the north side of the River Clyde, it’s a quick ten minute drive from Glasgow International Airport. As I discovered on my tour, Auchentoshan means “corner of the field”, as the distillery literally sits in the corner of a field.

To reach Glasgow, I had a two hour drive north from Carlisle up the M6 and A74 in the most miserable of weather conditions. At one point the rain was so heavy, and the reduction of my visibility was so severe had the car in front of me not been bright yellow, I would have had to pull over, assuming I was able to find the shoulder.  Even though the weather was certainly not cooperating, I was still looking forward to my afternoon at Auchentoshan.

Upon reaching the visitors centre,  I was greeted by a very friendly member of staff and I booked to take the next available tour. Prior to the tour beginning I was shown a small ten minute film on the history of Auchentoshan, and was offered tea or coffee along with a piece of authentic Scottish shortbread. By the time the film came to an end, there were a number of others waiting for the tour to begin, and away we went.

Much like every tour that I have taken, we were led from the mash tuns, to the washbacks and eventually to the still house, but once we arrived at the still house we were shown the one thing that separates Auchentoshan from every other Scotch distillery. Traditionally, when whisky is distilled in Scotland, it passed through two stills, much like giant kettles. First the liquid is boiled in the wash still, the larger of the pair, and then distilled a second time in the spirit still. Each time the liquid boils inside, it passes through the neck and collects in a massive drum where it comes into contact with copper pipes full of cold water. Once the steam from the still makes contact with the cold pipes it turns back into a liquid, and it’s this liquid that is put into casks and aged eventually becoming whisky. At Auchentoshan they distill their whisky three times in three separate stills, one wash, and two spirit, something that is rarely seen outside the production of Irish whiskey. The result is a much mellower and light bodied whisky, which will take a greater influence from the casks in which it’s stored.

Now came for the part of the tour where the group was to make our way across the grounds to one of the original warehouses. Did I mention it was raining? It was still raining very heavily, so our tour guide took it upon herself to hand out some umbrellas specifically reserved for visitors. By the time we reached the entrance to the warehouse (roughly 100 yards away), everyone on the tour was wet, very wet, and each of the umbrellas were now inside-out and useless. We spent a good ten minutes in warehouse learning about the different types of casks, their sizes, and the types of wood used. By the time our tour was ready to head for the tasting room, it was just our luck that it had stopped raining long enough for us to make back into the main building.

Our tour concluded with a dram of Auchentoshan 12 Year Old and a dram of Auchentoshan Three Wood. I must say, the 12 Year Old was an instant favourite. It was so smooth, and its beautiful ruby hue was a hallmark of the sherry barrels used in the aging process. Afterwards, I had a quick browse through the gift shop and picked up a jar of marmalade made with whisky from Auchentoshan, and a small set of bottles that is known as the Stillman’s Collection. In three 50mL bottles, there are samples of new make spirit at three different ages. The first was the day it was placed in the cask, the second was one year later, and the final was two years after being placed in the cask. It is amazing to see how much the spirit changes color in the first year, and how much more again in the second year. I picked it up as neat souvenir, but it has come in handy when I have been attempting to describe the whole maturation process.

Putting the weather aside, I really enjoyed my day at Auchentoshan. I was touring another Scotch distillery and was able to sample some of their wares, and picked up a couple neat gifts along the way. For any whisky enthusiasts visiting the Glasgow area, you need to take the time and head to Auchentoshan. Another excellent tour with a most hospitable staff, I couldn’t ask for anything else, except maybe a stronger umbrella.